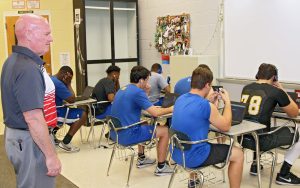 Over the past year, the Academy has worked with the University of South Alabama (USA) Department of Neurology and the Mobile County Public School System (MCPSS) under the Concussion Awareness Program (CAP), funded in part by a grant from the National Collegiate Athletic Association (NCAA) to USA. Under the program directed by USA, the University and the Academy developed procedures for use by the school system to better protect student athletes from the negative health consequences of concussions. Students, coaches and others involved in contact sports programs are provided training on concussion awareness and prevention. Protocols are also put in place to make sure that student athletes who receive concussions are not allowed to return to play until medical professionals approve.

Dr. Vincent K. Ramsey, Academy chair of sports exercise science, said a letter of cooperation was recently signed to expand the CAP partnership to all Baldwin Count Public School System (BCPSSS) high schools. He and Dr. Brandon Spradley, Academy director of sports management, recently provided concussion awareness instruction to Fairhope High School football players under the educational aspect of CAP. This part of the program provides student athletes, coaches, trainers and parents with an online tutorial application to evaluate and build upon their knowledge of concussion. Student athletes are required to complete the tutorial as part of the program.

The second element of the program relates to ensuring that athletes with concussions are given proper medical treatment and not allowed to resume competing until medically cleared. This is achieved by medical intervention and by standardized neurocognitive testing, a component achieved by each player taking two tests before the start of the season – an online neurological assessment and a balance test – which establish the athlete’s normal neurological function. After suffering a concussion or suspected concussion, the tests are taken again. Under the protocol, players suspected to have suffered concussions cannot resume competition unless released by medical professionals. 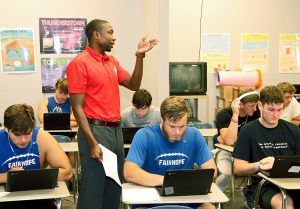 “Last year with the NCAA grant, we went to every Mobile County high school and tested every football player through the Concussion Awareness Program,” Ramsey said. “Athletes take a questionnaire, then watch a video with information about concussions and how they would report, then they would take the quiz again. The results showed a significant positive influence of the program.

“The results show a statistically significant improvement in the athletes’ levels of knowledge of concussions, as well as their perception of what a concussion is and what they should do to report it and recover.”

“Concussion education is very much needed, especially at the youth and high school levels,” Spradley said. “Much of what we hear about concussions come from sports media covering the NFL and other professional sports. Sometimes young athletes are forgotten about and neglected.

“Our hope is that this program will educate thousands of young athletes about the signs and symptoms of concussion,” Spradley said. “Our goal is for young athletes to have the right attitude and mindset towards concussion and improve their behavior and willingness to report concussion symptoms.”

USA is currently seeking a $1.6 million grant from the Centers for Disease Control (CDC) to build on the progress already made by CAP by expanding the program to a wider geographical area, as well as serve younger athletes. The Academy would provide the educational component of the concussion prevention program as a sub-recipient of the grant.

Dr. Anthony Martino, chairman of the Department of Neurosurgery in the USA College of Medicine, has practiced neurosurgery for 25 years and has championed head injury prevention programs. He is CAP’s principal investigator, along with co-principal investigators Dr. Ashley Marass, an assistant professor in USA’s College of Nursing, and Ramsey. Spradley, as well as USA Professor Dr. Benjamin Hill and Mary Wilstrup, USA pediatric clinical nurse, are also involved in CAP.

In addition to its involvement in CAP, the Academy offers a free online course on sport-related concussions which provides an in-depth review of the risks, prevention, recognition, treatment and management of sport-related concussions. The course also discusses the importance of awareness and education strategies for coaches, athletes, parents, administrators, and health care professionals. The course is available by going to www.ussa.edu/free-courses.