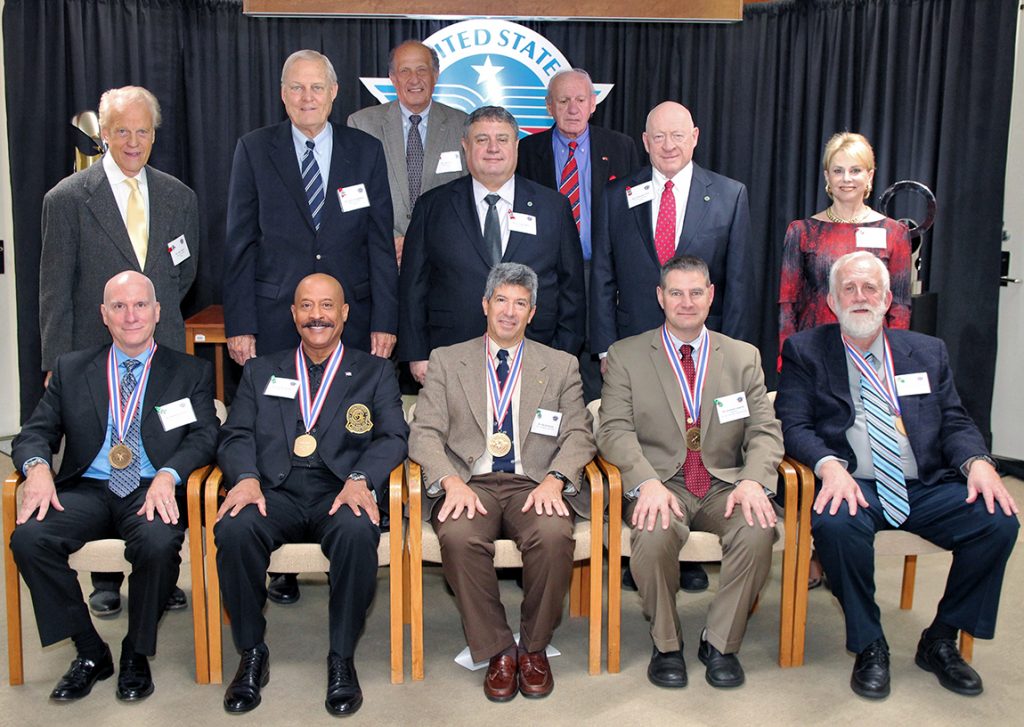 To view a full length video of the Awards of Sport 2017 ceremony, click here.

The United States Sports Academy recently held its 33rd Annual Awards of Sport program, a celebration of sport and art and “A Tribute to the Artist and the Athlete.”

The Academy’s Awards of Sport honor those who have made significant contributions to sport in categories as diverse as the artist and the athlete. The awards honor exemplary achievement in coaching, all-around athletic performance, courage, humanitarian activity, fitness, and media, among others. The Academy’s American Sport Art Museum and Archives (ASAMA) annually recognizes these men and women through its Sport Artist of the Year, Honorary Doctorates, Medallion Series, Distinguished Service Awards, Outstanding Athletes and Alumni of the Year awards.

A highlight of the event held on the Academy’s Daphne campus was the unveiling and donation to ASAMA’s permanent art collection works by the Academy’s 2017 Sport Artists of the Year: sculptor Richard Watkins of Atlanta, Ga., and painter William Williams of Battle Creek, Mich.

Watkins’ award-winning sculptures are known for capturing the energy, dynamics and balance of amazing athletes at that single moment of intense action: the slam dunk, the long pass into the end zone, the double play. He exaggerates the physical proportions to an extreme, giving them incredible action and an engaging quality.  His donation, a basketball piece entitled “Slam Dunk,” is now on display at ASAMA.

Williams is nationally known for his classical artistic approach to representing the glory of sports through his realistic still life oil paintings. His work is in the permanent collections of the National Baseball Hall of Fame, the College Football Hall of Fame, the Commissioner of the National Basketball Association, the New York Yankees, and many others. His donation now on display at ASAMA is a still life entitled “Satchel’s Monarchs” which depicts artifacts related to legendary baseball player Satchel Paige.

A show featuring works from both artists is now on display at ASAMA in the Dr. Thomas P. Rosandich Gallery, which is named after the Academy’s Founding President.

Among other key honors at the event, Dr. Dave Shrock was named the Academy’s Alumnus of the Year.  A national leader in track and field and an Academy National Faculty member, Shrock earned a Doctor of Education degree in Sports Management from the Academy in 2009.  He has taught sports marketing and sports leadership for the Academy’s international sport education programs in Thailand, Bahrain and the United Arab Emirates.

A resident of Modesto, Calif., Shrock serves in numerous USA Track and Field (USATF) leadership roles including president of the nation’s largest association, the Pacific Association; Coaching Committee chair; and as chair of the National Associations Committee.  In 2017 the USATF presented him the McGill Legacy Coaching Award in recognition of his “passion and leadership nationally for the promotion of USATF coaching education.” Shrock has more than 40 years of track and field coaching experience, including 20 years as a college coach. His association work includes oversight of several national championships and hosting Olympic trials.

“I accept this award on behalf of the alumni of the United States Sports Academy because we are the ones who utilize the knowledge, passion and experience gained from this great institution to continue to work for the betterment of sport,” Shrock said.

Also in attendance was the winner of the Dr. Ernst Jokl Sports Medicine Award, Dr. Kenneth Cameron, who is director of Orthopaedic Research at Keller Army Community Hospital in West Point, N.Y.  Cameron’s primary research interests are in the areas of injury prevention, musculoskeletal injury and disease epidemiology, and outcomes associated with the treatment of these injuries, specifically in physically active and military populations.

Receiving the Dwight David Eisenhower Fitness Award at the event was master personal trainer Fairfax Hackley, who won 12 class titles in bodybuilding and later served as a judge and as director of the Mr. America contest.  He spent more than 20 years in the sport, winning the International Federation of Body Building and Fitness (IFBB) Silver and Gold Awards for Excellence in Administration. He has trained numerous celebrities and athletes, including boxers and mixed martial arts (MMA) fighters.  He has worked closely with the Arnold (Schwarzenegger) Sports Festival in Columbus, Ohio.  The resident of Falls Church, Va., is a member of the International Sports Hall of Fame, serving on its advisory board.

Here is a complete list of the 2017 Academy’s Awards of Sport honorees:

The Academy’s Male and Female Athletes of the Year will be selected in January with the input of international online balloting.

To view a video of the complete 2017 Awards of Sport program, go to https://www.youtube.com/watch?v=jAknCmzB29k.