The United States Sports Academy is mourning the loss of Dr. Robert Block, the Founding Chairman of the Academy’s Board of Trustees, who passed away from natural causes on 12 October 2021 at age 93.

Block played a crucial role in the founding and growth of the Academy and was awarded an Honorary Doctorate from the institution in 1982. In addition to being the Founding Chairman of Academy’s Board of Trustees, Block served on the board for 44 years, beginning with the Academy’s inception in 1972.  Block provided space for the Academy’s first location in Milwaukee, Wisc. Together with Founding President Dr. Thomas P. Rosandich and other founding members of the board, Block also helped recruit and select the Academy’s first National Faculty.   Block was also instrumental in the creation of the Academy’s logo, which has become a symbol recognized around the world.

When the Academy moved to the University of South Alabama campus in Mobile, Ala., in 1976 and to its current home in Daphne, Ala., in 1986, Block continued as a dedicated member of the Board of Trustees. 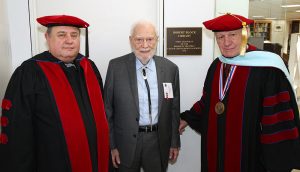 In 2016, the Academy named its on campus library the “Robert Block Library” in his honor.

“Bob was one of those rare individuals who truly made a difference in the world,” said Academy President and CEO Dr. T.J. Rosandich. “He was the epitome of a renaissance man insofar as he was a creator, author, entrepreneur and humanitarian. I’ve considered him a decades-long friend and colleague who will be sorely missed by all who have been fortunate enough to know him.”

The President of 3D Business Tools in Reno, Nev., Block had a long and successful career in the computer software, communication and entertainment industries that includes pioneering roles in commercial and pay television, as well as cellular telephone operating companies. Block contributed significantly to the creation and development of entertainment and communication technologies used worldwide. He was granted more than 150 U.S. and foreign patents, including patents related to solar energy panels, in-building communications, and pay-per-view television, as well as terrestrial and satellite distribution systems.

He was a published author and founder of numerous companies in the communications, energy, software development, business and entertainment fields.