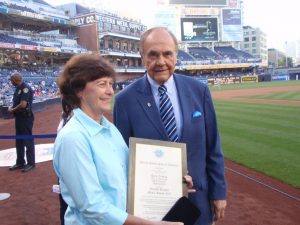 DAPHNE, Ala. – The United States Sports Academy is mourning the loss of two-time Awards of Sport honoree Dick Enberg, a legendary sports broadcaster who passed away on 21 December 2017 at age 82.

Enberg, who was honored with the Academy’s Ronald Reagan Media Award in 1989 and 2013, retired from broadcasting in 2016.  He worked in the broadcasting industry for more than half a century.

Enberg began broadcasting in 1957, providing play-by-play in various sports for such networks as NBC, where he worked for 25 years, CBS, and ESPN. He became well known for his signature catchphrase during outstanding plays: “Oh, my!”

The Academy’s Ronald Reagan Media Award, named in honor of the 40th President of the United States, is presented annually to an individual for outstanding contributions to sport through broadcasting, print, photography or acting. The individual should exhibit imagination, excitement and genius in kindling a keen public interest and appreciation for the role of sport in modern society.

In 2015 Enberg was named the recipient of the Ford C. Frick Award for excellence in baseball broadcasting from the National Baseball Hall of Fame. He has been selected for broadcasting awards from the halls of fame of professional football, baseball and basketball.

Enberg retired in 2016 after seven seasons as the television play-by-play announcer for the San Diego Padres. In Enberg’s last week on the job, he made a guest appearance in the booth with another Reagan Media Award winner, Vin Scully, who retired the same year.

Enberg, Cal State Northridge’s assistant baseball coach and an assistant professor in the early 1960s, was also an accomplished writer. He wrote his autobiography, “Oh, My!” in 2004 and penned a one-man theatrical play, “COACH.” The play, which debuted in 2005, is a tribute to his former college basketball broadcast partner and late friend, Al McGuire.

Enberg won 13 Sports Emmy Awards and a Lifetime Achievement Emmy. He won nine National Sportscaster of the Year awards from the National Sportscasters and Sportswriters Association and was inducted into that organization’s Hall of Fame. Enberg even has a star on the Hollywood Walk of Fame.