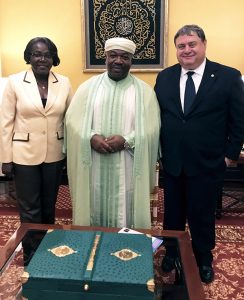 DAPHNE, Ala. – The United States Sports Academy will work with the central African nation of Gabon to strengthen the country’s national sports program under a new five-year cooperative agreement.

The Academy, which has worked on sport education and development projects in more than 65 nations, will work with Gabon on numerous enhancements including youth sports, sport facilities, national teams, and strength and conditioning. The project culminates several years of cooperation between the Academy and the nation of 1.7 million people.

“The first major international program on which the Academy embarked was in the Middle East in 1977, and we’ve since worked in numerous countries around the world,” said Academy President and CEO Dr. T.J. Rosandich.

“This is the latest chapter in our mission of providing the world with programs in teaching, research and service in support of the advancement of sport.

“The Academy is pleased that Gabon is interested in building on its national sport program and we are looking forward to working with His Excellency President Ali Bongo Ondimba and Her Excellency Nicole Assélé, the Minister of Youth and Sport, on this important effort.”

The project is designed to assist in the development of Gabon’s sport infrastructure in the areas of sports management, strength and conditioning for the nation’s teams, physical education and scholastic sports for the school system and general assistance to the country’s central sports organization. The Academy will evaluate, plan and assist with the upgrading and modernization of programs for the governmental agency, including writing specifications for sports equipment to support the national sports program. The program will start with the Academy immediately deploying staff to focus on sport management and strength and conditioning.

The Academy’s work in Gabon goes back to 2010 and the signing of a protocol for cooperation to develop sport in that country. This led to a project in which the Academy conducted a facilities legacy study on how to make best use of the Sino-Gabonese Friendship Stadium in Gabon’s largest and capital city of Libreville. The 40,000-seat stadium was given to Gabon by the Chinese government and used for the Africa Cup of Nations (AFCON) soccer tournament in 2012.

In 2013, an Academy team led by then-Vice President Dr. T.J. Rosandich and involving Academy faculty including Dr. Fred Cromartie, director of doctoral studies, conducted a comprehensive assessment of the national sports effort in Gabon. This review looked at the complete planning, management, staffing, and facilities of all interscholastic sport in the country. The program made recommendations to the Gabonese government on enhancing the sport effort at all levels. In addition to faculty and staff at the Academy and counterparts in Gabon, the collaboration has been aided by the ongoing efforts of Academy Trustee Joe Szlavik, president of Scribe Strategies & Advisors, Inc.

In 2014 then-Gabonese Minister of Youth and Sport His Excellency Blaise Louembe and His Excellency Michael Moussa-Adamo, Gabonese Ambassador to the United States, visited the Academy campus in Daphne, Ala., to further establish a framework for the Academy and Gabon to work together to implement recommendations of the plan. While momentum was initially positive, the global recession slowed the effort.

The plan to boost Gabon’s sports programs recently took on new urgency when Gabonese President Ali Bongo Ondimba invited Dr. T.J. Rosandich, now the Academy’s president and chief executive officer, to Gabon to meet with him and the government’s highest ministers of sport. It was agreed that efforts to build on the country’s sports program would be renewed.