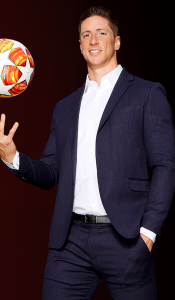 The values and leadership course – which is planned to be offered 100% online by the Academy in 2022 – will focus on Torres’ famous nine values: Respect, Discipline, Commitment, Humility, Courage, Trust, Loyalty, Perseverance, and Devotion.

Torres is a Spanish football (soccer) manager and longtime former player on the international stage. Torres started his career with Atlético Madrid, progressing through their youth system to the first-team squad. He made his first-team debut in 2001 and finished his time at the club with 75 goals in 174 La Liga appearances. Prior to his La Liga debut, Torres played two seasons in the Segunda División for Atlético, making 40 appearances and scoring seven goals. Torres joined Premier League club Liverpool in 2007, after signing for a club record transfer fee. He marked his first season at Anfield by being Liverpool’s first player since Robbie Fowler in the 1995–96 season to score more than 20 league goals in a season.

Since its founding nearly a half-century ago, the Academy has leveraged its role and resources as a special mission sports university to make a global impact through quality sport instruction, research and service programs in 67 countries around the world. These contributions have varied in scope from the full-charge conduct of a nation’s entire national sport effort to individual coaching clinics, seminars, and symposia.  For more about the Academy’s international programs, go to https://ussa.edu/international/.

Posting....
By clicking accept, you agree to the storing of cookies on your device to enhance site navigation and analyze site usage. Accept