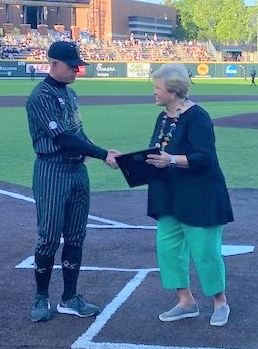 Vanderbilt University baseball coach Tim Corbin has received the United States Sports Academy’s 2020 Amos Alonzo Stagg Coaching Award in recognition of his successful tenure leading the Commodores to a pair of national championships (2014, 2019) and more than 750 wins in 19 seasons in Nashville.

Corbin was presented the award in Nashville, Tenn., before his Commodores baseball team played a home game on the Vanderbilt campus by Academy Trustee and University of Tennessee Athletics Director Emerita Joan Cronan. The presentation had been held in abeyance since 2020 due to COVID-19 social distancing requirements.

During his tenure at Vanderbilt, Corbin has turned the Commodores from a perennial Southeastern Conference doormat into a national power. Before his arrival on campus, the Commodores had only posted six winning seasons since baseball became a scholarship sport at the school in 1968. His record prior to the 2021 season of 753-359-1 (.677) is first all-time in wins at Vanderbilt and first in winning percentage for coaches with 100 games or more. In his career as a head coach Corbin is 859-497-1 (.633). Corbin’s efforts have paid off in the win column and across the board as D1Baseball.com tabbed Vanderbilt the top program in the nation in 2015 and second in 2017 and 2019.

In January 2020, Corbin was inducted into the American Baseball Coaches Association Hall of Fame as part of the class of 2020. Corbin was among six individuals to be enshrined at the 76th annual ABCA Convention. Over the last seven seasons, the Commodores have secured three trips to the College World Series finals while running their streak to 14 consecutive NCAA Tournament berths — the longest active streak in the Southeastern Conference.

The Commodores capped their shortened 2020 campaign ranked No. 5 by Collegiate Baseball. Vanderbilt led the nation in ERA (1.84) while finishing third in hits allowed per nine innings (5.51), fourth in strikeouts per nine innings (12.1) and fifth in shutouts (4).

Vanderbilt posted an SEC-record 59 wins during its historic 2019 College World Series championship campaign. The Commodores captured the SEC regular season and tournament titles, becoming the first program to accomplish the feat outright since Vanderbilt’s 2007 program did so. The Commodores set single-season records in home runs (100), RBIs (541), walks (339), runs (578) and strikeouts (765). For his efforts, Corbin was named American Baseball Coaches Association and Collegiate Baseball’s coach of the year.

The Amos Alonzo Stagg Coaching Award was part of the United States Sports Academy’s Awards of Sport program, which each year served as “A Tribute to the Artist and the Athlete.” The Academy presented the awards to pay tribute to those who have made significant contributions to sport, in categories as diverse as the artist and the athlete in several different arenas of sport.