A sports administrator with one of the most diverse resumes in the collegiate ranks, Dr. Kristene Kelly has received the United States Sports Academy’s 2020 Alumna of the Year award during a ceremony on the campus of Vanderbilt University.

Kelly was presented her award in Nashville, Tenn., during a Vanderbilt University baseball game by Academy Trustee and University of Tennessee Athletics Director Emerita Joan Cronan. In addition, Cronan presented the Academy’s Amos Alonzo Stagg Coaching Award to Vanderbilt baseball coach Tim Corbin during the same ceremony. The presentations had been held in abeyance since 2020 due to COVID-19 social distancing requirements. 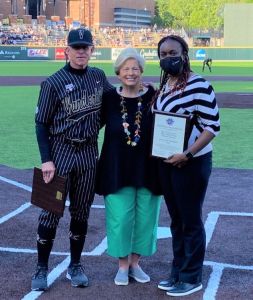 Kelly earned her Doctor of Education degree in sports management with a sports leadership specialization from the Academy in 2014. She credited the flexibility of the Academy’s online education options as being crucial to earning her doctoral degree and advancing her career in athletics administration.

“The online approach with the Academy was phenomenal for me,” Kelly said.

“When I entered the program, I was working full-time as a sports information director, which required endless travel and late nights. This approach allowed me to complete my coursework at my convenience.”

Prior to joining the Vanderbilt athletics department, Kelly worked as the executive associate athletics director for varsity sports and senior woman administrator at Dartmouth College.

“The Academy doctorate afforded me the opportunity to teach on the collegiate level and to serve as a full-time faculty member and department chair at my job at Saint Augustine’s University.

“The Academy faculty is quite diverse with varied experiences. Their knowledge and expertise really assisted me in learning and critically thinking about the wide world of sport.

“One thing I thoroughly enjoyed about the Academy is how each class is personalized to the individual student’s knowledge base and specialization. I am an intercollegiate sport enthusiast so I was able to truly delve into all types of issues relative to collegiate sport.

“My Academy mentorship with the vice president of student services at Saint Augustine’s University was extremely beneficial as I got to see and experience a different side of higher education where, at some campuses, the athletics department is held.

“I recommend the Academy to anyone who truly loves the business of sport. The faculty are caring but tough. The high academic expectations, the vast library resources, the distinguished faculty and the ability to work at your own pace without giving up your career were all things that attracted me to the Academy.”

Kelly is a 2000 graduate of Johnson C. Smith University in Charlotte, N.C., where she earned two bachelor’s degrees in physical education and communication arts. She earned a master’s degree in human performance and sports studies at the University of Tennessee. She later also earned the CIAA John Holley SID of the Year award in 2005 while working as sports information director at Johnson C. Smith University.

Kelly has also served as a member of the NCAA Woman of the Year Committee, NCAA Division II Track and Field Committee and the CIAA Management Council. She was part of the NCAA Leadership Institute for Ethnic Minority Women (2007) and the NCAA/NACWAA Executive Institute for Administrative Advancement (2010).