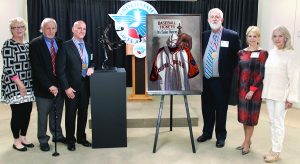 A highlight of the event on the Academy’s Daphne campus was the unveiling and donation to the American Sport Art Museum & Archives (ASAMA) permanent art collection works by Watkins and Williams. Watkins’ basketball piece “Slam Dunk” and Williams’ piece “Satchel’s Monarchs,” which honors the legacy of baseball legend Satchel Paige, are now on permanent display at ASAMA.  In addition to the permanent pieces, a show featuring works from both artists is now on display at ASAMA in the Dr. Thomas P. Rosandich Gallery.

The Sport Artist of the Year Award is part of the Academy’s Awards of Sport, which each year honor a wide range of accomplishments in sport and serve as “A Tribute to the Artist and the Athlete,” in conjunction with the Academy’s American Sport Art Museum and Archives (ASAMA). The awards recognize these men and women through the Sport Artist of the Year, Honorary Doctorates, Medallion Series, Distinguished Service Awards, Outstanding Athletes, and Alumni of the Year awards.

Watkins’ work is known for capturing the energy, dynamics and balance of amazing athletes at that single moment of intense action: the slam dunk, the long pass into the end zone, the double play. He exaggerates the physical proportions to an extreme, giving them incredible action and an engaging quality. Watkins grew up in West Virginia, where he enjoyed drawing and sculpting with whatever materials he could find.

After college, Watkins worked in several design studios in Cincinnati before making his way into the toy design business. After 25 years designing toys, Watkins began to turn his old sketches and models into larger, more finished pieces of art.

“I love sculpture and I love sports. My work is an attempt to mix the two,” Watkins said. “Once I retired I began to look through all those old sketches and models and tried to turn them into larger, more finished pieces.

“I know they don’t look realistic, but I’m not going for realistic,” Watkins said. “I’m trying to capture the dynamics and balance of these amazing athletes.

“The exaggerated poses and proportions are how I see the human form. After all, what are athletes but real humans with the most extreme physical proportions making them capable of the most incredible action? So maybe my work isn’t so exaggerated after all.”

An award-winning artist, some of his most recent accolades include being named Best in Class at the 2017 Chastain Park Arts Festival in Atlanta. He also earned first place honors at the 2017 Metro Montage XVII at the Marietta/Cobb Museum of Art in Marietta, Ga.

Williams’ paintings are the permanent collections of the National Baseball Hall of Fame, the College Football Hall of Fame, the Commissioner of the National Basketball Association, the New York Yankees, the U.S. Military Academy at West Point, the U.S. Naval Academy and the Butler Institute of American Art. He has won numerous awards, including the Lake Orion Art Center Award, Best of Show in the Art of Golf Festival in Pinehurst, N.C., and Best of Show at an Ohio statewide art competition.

A native and resident of Battle Creek, Mich., Williams earned his bachelor’s degree from Alma (Mich.) College and master’s degree from Boston University. He was a varsity athlete in high school and college and began his work as a professional artist in 1989. Williams has earned national acclaim for his sports art, but his work also includes oil and pastel portraits.

“My still life paintings are created to allow viewers to feel an emotion or memory that has been important to them,” Williams said. “The creation of these works allows me to express ideas that can be best relayed through images. All of this is done with the idea of creating a beautiful piece of artwork and at the same time represent the history of sports, teams and athletes.

“Still life paintings I execute are created from life, using a large collection of items accumulated through many years of searching. I buy objects that inspire and help me envision a finished painting. It may be the centerpiece of the composition or a complement to other items already in my collection.”

Williams has been commissioned to create works of art for numerous significant sports events, including the program, ticket covers and limited edition prints for the 100th Army vs. Navy football game; limited edition prints for Cal Ripken Jr. when he broke Lou Gehrig’s consecutive games record; the College Football Hall of Fame induction ceremony program; and an original oil painting for Darren McCarty of the Detroit Red Wings. Other commissions include art for the University of Washington’s football program and the University of Oregon’s basketball program.

His illustrations are featured in numerous publications and exhibitions around the United States. He illustrated “A Pitch in Time” by Robert A Lytle, a book which won the Benjamin Franklin Silver Award from the Publishers Marketing Association. He contributed artwork for the Chicago White Sox media guide and pocket schedule, the Bill Williams Calendar of Sports Images, the New York Yankees video scoreboard, the Oakland Athletics Magazine, Spitball Magazine, and the contributed illustrations for the book “Baseball: A Treasury of Art and Literature.” His work also adorned a MasterCard credit card.

Williams’ works have also been featured at the Butler Institute of American Art in Youngstown, Ohio; the Grand Rapids Art Museum in Michigan; and the Kalamazoo Institute of Arts in Michigan. He also has works featured at the Wandering Oaks Fine Art Gallery in Wimberly, Texas, and in the Old Sport Gallery in Pinehurst, N.C., and Harbor Springs, Mich.