Founded in 1984, the American Sport Art Museum and Archives (ASAMA) is dedicated to the preservation of sports art, history and literature. The ASAMA collection is composed of more than 1,800 pieces across all media, including paintings, sculptures, assemblages, prints, posters and photography.

Located in the architecturally-acclaimed main campus building of the United States Sports Academy in Daphne, Ala., ASAMA houses what is believed to be the largest collection of sport art in the world. The Thomas P. Rosandich Gallery preserves the performance and movement of man by creating an awareness of the role art media play in capturing our sports heroes and perpetuating their performances for posterity. 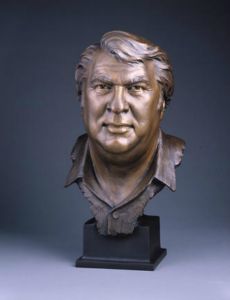 Also featured is the largest public art offering in the state of Alabama, the famed two-story tall mural by Maestro Cristóbal Gabarrón. “A Tribute to the Human Spirit” graces one wall of the main campus building and has become a landmark on the Eastern Shore.

The ASAMA collection is also known for its large assortment of Bruce Larsen “found art” sculptures on the Academy grounds, representing some of the world’s most famous athletes including gymnast Nastia Liukin, swimmer Mark Spitz, sprinter Valeriy Borzov and basketball player Michael Jordan.

In addition to maintaining the art collection, ASAMA conducts the Academy’s Sport Artist of the Year Award. The award, which was first presented in 1984, is given to an individual who is perceived to capture the spirit of sport, so that future generations can relive the drama and excitement of today’s competitions. The gallery also periodically features showings by renowned sport artists.

If you would like to know more about ASAMA or view over 1,800 pieces of art on display, please visit the ASAMA website. And if you are in the area, the museum is also open to the public, free of charge, Monday – Friday from 9am-4pm. We welcome all guests.