Betsy Conaty was one of the stars behind the start of University of North Carolina’s historic and remarkable run of women’s soccer dominance. Her winning goal in the inaugural NCAA women’s soccer championship match in 1982 gave the Tar Heels their first national championship, the first of 22 the program has won to date. 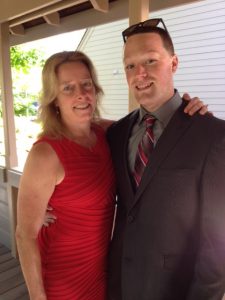 Betsy Conaty with her son, Brian.

A 1985 North Carolina graduate, Conaty is now pursuing a Doctor of Education degree in Sports Management with an emphasis in sports health and fitness from the United States Sports Academy. A professor of health, safety and wellness at the State University of New York (SUNY) Sullivan, Conaty earned her master’s degree from Emporia State University in 2003.

“My education from the United States Sports Academy has definitely helped me to become a better educator,” Conaty said. “Obviously all of the research and writing required in the doctoral program has kept me abreast of current events and findings in sport and exercise-related topics. I love the fact that the Academy focuses only on sports. This has added so much relevance to my studies.

“My Academy mentorship was a tremendous experience,” she said. “I worked with the Navy Experimental Diving Unit on a multiphase human performance study. As part of this, I also presented information and findings at two national conferences.”

Conaty said being part of the UNC women’s soccer team has been an “amazing experience.” A native of Pond Eddy, N.Y., she graduated from Eldred High School, where she scored 172 goals in four years and led her team to an undefeated season in 1981. She was also a 1,000-point scorer in basketball and started on the school’s softball team.

At North Carolina, Conaty scored 23 goals and had 41 assists in four seasons. The Tar Heels compiled a 92-5-3 record, won three national championships and finished as the national runner-up once while she was part of the team.

“Although I played in what is affectionately called the ‘dinosaur era,’ the main cogs of the UNC coaching staff remain the same — head coach Anson Dorrance and assistant coach Bill Palladino,” Conaty said. “Anson has always stressed that team is family, no matter what decade you played in. So, to this day, we receive updates, inspirational messages, and various emails from players and coaches alike. Once you are a Tar Heel, you are a Tar Heel for life.

“Although winning multiple national championships was an incredible experience, looking back I realize that Anson instilled so many core values in us that have helped in every aspect of life. Soccer itself was actually a secondary benefit of being a UNC soccer player.”

After graduating from UNC with a Bachelor of Science in Public Health in 1985, Conaty embarked on a career as the executive director of a hospice program. Later, she worked as an emergency room administrator before pursuing a career in the sports and fitness field.

She owned and operated a soccer camp for 18 years and worked many summers as an instructor at the North Carolina Girls Soccer Camp. Today, she teaches sports management, physical education and fitness at SUNY Sullivan. She also advises students, develops curriculum and programs, and participates in on campus committees.

“I thoroughly enjoy working in higher education, particularly since I teach a large variety of classes, both seated and online,” Conaty said. “One of the most enjoyable aspects of my job is the diversity of our students. We have traditional students as well as non-traditional students, those who have been in the workforce for many years and are returning to school in hopes of a new profession. It is also always great to see our local county students from rural areas mingling with our downstate, New York City students. We have students from every county in New York, as well as a number of international students.”

Whatever she chooses to do after earning her doctoral degree from the Academy, Conaty said she hopes to have the opportunity to be a positive influence on the people she encounters.

“Receiving emails and updates from former students thanking me for helping them to pursue their goals is extremely gratifying,” Conaty said. “Having adults, who were once young soccer players, come up to me and say how much they still remember soccer camp and what it meant to them, is as well. Seeing that I have had a positive impact on a number of people is what I would consider a great accomplishment.”