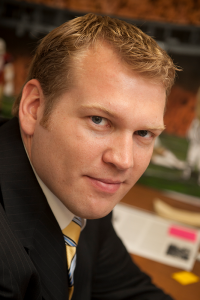 Dr. Chris Nowinski, one of the world’s leading advocates for sport related concussion research and education, has been named the recipient of the United States Sports Academy’s 2019 Dr. Ernst Jokl Sports Medicine Award.

Nowinski is a social entrepreneur leading a global conversation on concussions, CTE (chronic traumatic encephalopathy), and the future of sports. He is co-founder and CEO of the non-profit Concussion Legacy Foundation (CLF), and author of the critically acclaimed 2006 book “Head Games: Football’s Concussion Crisis.”

Nowinski is also a co-founder and investigator at the Boston University CTE Center. He has coauthored more than 30 scientific publications, including a groundbreaking study published last week in Annals of Neurology that found each year playing tackle football increases the odds of developing CTE by 30 percent. Nowinski led recruiting efforts for the 266 deceased football players who made that study possible. Following the publication of the study, he launched CLF’s Tackle Can Wait campaign, which compares the risk of youth tackle football to smoking and encourages parents to wait until their child is at least 14 before playing tackle.

The Dr. Ernst Jokl Sports Medicine Award, named in honor of the former Olympic athlete, international sports medicine scholar, and director of the University of Kentucky Rehabilitation Center, is given annually to an individual for his or her contributions to the growth and development of sport medicine through practice and/or scholarly activity. The individual should exhibit a mastery of some aspect of sports medicine through practice or research, be well known in the sports medicine field and have an abiding belief in and practice of ethical behavior in pursuit of knowledge.

An All-Ivy League Harvard football player-turned professional wrestler, Nowinski’s interest in brain trauma stems from personal experience. Nowinski suffered a serious concussion while wrestling with the WWE in 2003, but due to a lack of understanding, he was not honest about his symptoms and continued to perform for five weeks while symptomatic. He developed post-concussion syndrome and was forced to retire. It wasn’t until he visited the renowned neurosurgeon Dr. Robert Cantu that Nowinski was first exposed to medical research that showed him concussions and brain trauma were misunderstood in the sports world. He realized this lack of awareness among athletes, coaches, and even medical professionals not only cost him his career, but also threatened the health and well-being of athletes of all ages.

In 2007, he co-founded the Concussion Legacy Foundation with Cantu to support athletes, Veterans, and all affected by concussions and CTE; achieve smarter sports and safer athletes through education and innovation; and to End CTE through prevention and research. In 2008, CLF partnered with Boston University School of Medicine to found the BU CTE Center and VA-BU-CLF Brain Bank, where Nowinski serves as the Outreach, Recruitment, Education, and Public Policy Leader. He has led efforts to build the world’s largest athlete brain bank, with more than 750 brains donated in the last decade. Nowinski earned his Ph.D. in Behavioral Neuroscience from Boston University School of Medicine.

VICE Sports called Nowinski “the man most responsible for making CTE part of the national conversation,” and Sports Illustrated said, “it is Nowinski’s figure which looms behind the doctors and the headlines and the debate roiling over sports’ newfound commitment to minimizing head trauma.”

In 2012 he received the Academy’s Distinguished Service Award. The Dr. Ernst Jokl Sports Medicine Award is part of the Academy’s Awards of Sport, which each year honor a wide range of accomplishments in sport and serve as “A Tribute to the Artist and the Athlete,” in conjunction with the Academy’s American Sport Art Museum and Archives (ASAMA). The awards recognize these men and women through the Sport Artist of the Year, Honorary Doctorates, Medallion Series, Distinguished Service Awards, Outstanding Athletes, and Alumni of the Year awards.