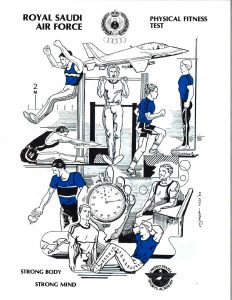 DAPHNE, Ala. — The recent announcement that female students in the Kingdom of Saudi Arabia will soon be allowed to play sports at school for the first time harkens back to more than 30 years ago when the United States Sports Academy became one of the first institutions to provide sports programs for women and children in that country.

According to an announcement from the Ministry of Education, female students in Saudi Arabia will soon be allowed to play sports at school for the first time after the ministry overturned a longstanding ban of the practice. The ministry said Saudi girls would be allowed to start taking physical education classes in the upcoming school year. The announcement said girls sports offerings would be introduced gradually and “in accordance with the rules of sharia,” or Islamic law.

However, the Academy was a pioneer in providing opportunities for women and girls in sport in Saudi Arabia through an offshoot of a massive project with the country’s military beginning in the early 1980s.

From 1981 to 1989, the Academy was contracted by the Royal Saudi Air Force (RSAF) to undertake a comprehensive physical fitness, sport and recreation program involving thousands of military personnel at five bases across the country. At its peak, the program involved some 200 full time coaches and 300 support staff and 20 different sports and activities. The program included annual physical fitness testing for the RSAF personnel, the development and training of competitive sports teams and general recreational activities. These, and other services, were conducted over several years for thousands of service members in the kingdom.

Because the Academy already had staff in place for this military program, its leaders offered base commanders at the five locations the services of the spouses of its personnel to provide physical fitness, sport and recreation programs for the dependent women and children of the military personnel.

“We went to the base commanders and the Air Force commanders and offered to do the programming at no cost, which we were pleased they accepted,” said Dr. T.J. Rosandich, current President and CEO of the Academy, who worked for the Academy in Saudi Arabia at the time as a senior executive on the project.

“As a result of this arrangement, the Academy was among the first institutions ever to offer sports programs for women and children in Saudi Arabia.
“We offered a wide range of physical fitness, sports and recreation programs, including swimming and drown-proofing, recreational sport activities and classes on topics as varied as nutrition and smoking cessation.”

Through the 1980s and 1990s, the Academy had numerous additional successful projects with Saudi Arabia, including developing a master plan for sports facility development for the Ministry of Defense and Aviation; recruiting and providing national coaches for various sports through the General Presidency of Youth Welfare; arranging a training camp in the United States for Saudi Olympic teams in preparation for the 1984 Olympic Games; and conducting numerous sports clinics and seminars.

Founded 45 years ago, the Academy has contributed to the global quality of life by delivering sport education and service programs in 65 countries around the world. These have varied in scope from the full-charge conduct of a country’s entire national sport effort to individual coaching clinics, seminars and symposia. For more about Academy’s international efforts, go to www.ussa.edu/international/.

Women in Saudi Arabia have long been strictly monitored for their style of dress and activities in public. Saudi women must cover their hair and bodies in public and are not allowed to drive or travel abroad without permission from a male guardian. The strict rules have also largely kept women from widespread participation in sports. Schools in Saudi Arabia remain segregated by gender.

Saudi Arabia first allowed girls to participate in sports four years ago, but the offer was only extended to those attending private schools.

Just four women competed for Saudi Arabia in the 2016 Olympic Games in Rio de Janeiro, Brazil. In 2012, the kingdom sent just two women to compete in the Olympic Games in London after the International Olympic Committee suggested it might bar the country from participating if it did not do so.

The education ministry has said allowing girls to participate in physical education and sports at school is part of the Saudi Vision 2030 plan, which aims to “diversify the Saudi economy” and expand opportunities for exercise for all citizens.