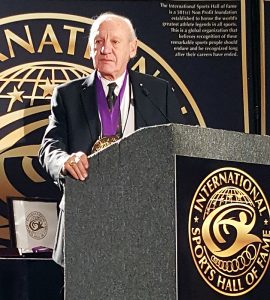 The official video is now available of United States Sports Academy Founding President Dr. Thomas P. Rosandich being inducted as part of the 2017 class of the International Sports Hall of Fame (ISHOF) at the Arnold Schwarzenegger Sports Festival in Columbus, Ohio, on 4 March 2017.

The ISHOF is a non-profit foundation established by internationally known fitness expert Dr. Robert M. Goldman “to honor the world’s greatest athlete legends in all sports.” The ISHOF is “a global organization that believes recognition of these remarkable sports people should endure and be recognized long after their careers have ended. Just as important is what Hall of Fame candidates do later in life, in giving back to others and society, with charity work, and mentoring young people.”

To view the video, which includes the Founding President’s comments at the occasion, go to https://youtu.be/ajyD-yIEzkQ .

To view the earlier story on the induction, go to https://ussa.edu/news/academy-founder-dr-thomas-p-rosandich-named-to-international-sports-hall-of-fame/ .