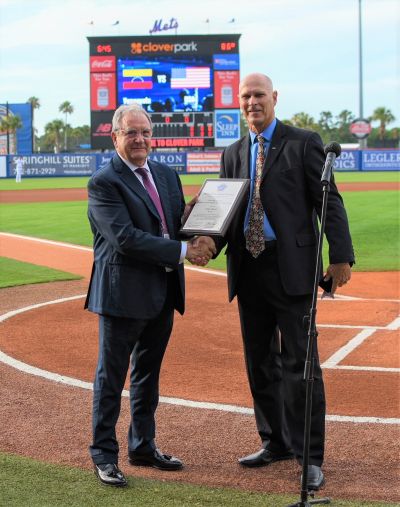 The Eagle Award is the Academy’s highest international honor and has been presented annually to a world leader in sport to recognize that individual’s contributions in promoting international harmony, peace, and goodwill through the effective use of sport. The recipient of this award must have tempered strength with keen judgment in using authority wisely as a means of bringing nations together through sport for the betterment of mankind.

Fraccari is a world sport administrator, holding various high ranking positions, and is the current president of the WBSC. Fraccari’s leadership was instrumental in influencing the International Olympic Committee to reinstate baseball and softball into the Tokyo 2020 Olympic Games. He has served in seven Olympic Games as a baseball official. He was presented the award by Academy Trustee Emeritus, 1995 Sport Artist of the Year, and Olympian Foundation President Dr. Liston Bochette III.

“It is a tremendous honor to receive this award and feature among the many important people that have received before me,” Fraccari said. “I look forward to visiting the campus later this year and meeting the students and the leaders of the United States Sports Academy.”

The Eagle Award was originally scheduled to be presented to Fraccari at an Academy event in June 2020, but was postponed due to the COVID-19 pandemic.

Fraccari also led negotiations between the WBSC and Major League Baseball for a multi-year, multi-million dollar agreement for the ongoing operation and sanctioning of the World Baseball Classic tournament. Fraccari is serving various roles such as Secretary General of the Association of IOC Recognized International Sport Federations (ARISF) and is currently member of the Italian National Olympic Committee board. He was also elected to the Global Association of International Sports Federations (GAISF) Council.

Serving in sports leadership since 1985, Fraccari has earned the Gold Star of Merit from the President of the Italian Olympic Committee, the Knight of Merit of the Italian Republic, and induction into the Hall of Fame of the Italian Baseball Softball Federation.