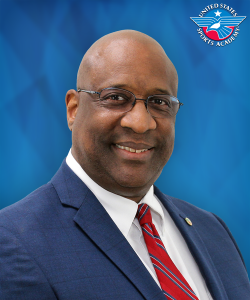 DAPHNE, Ala. — United States Sports Academy Director of Doctoral Studies Dr. Fred Cromartie says America can expect a rise in the popularity of soccer and greater future success of American soccer teams in anticipation of the 2026 World Cup, hosted by the United States, Mexico and Canada.

The so-called “United” bid recently defeated a bid by Morocco by 134 to 65. The winning bid marks the return of soccer’s largest international tournament to the United States for the first time since 1994. Bid organizers and FIFA officials expect record crowds and the use of existing venues to bring in revenues of more than $14 billion.

Ironically, the bid award came on the eve of the 2018 FIFA World Cup in Russia, a tournament in which the United States did not qualify a team.   Still, Cromartie said, America’s reputation as a sports and economic powerhouse helped it to prevail.

“Awarding the World Cup to the United States represents greater economic means and a great financial benefit for the FIFA organization,” Cromartie said. “With 60 of 80 matches hosted in the United States, they estimate the worth at about $14 billion to FIFA.”

In FIFA’s evaluation of the two bids, Morocco’s bid was rated as “high risk” for the organization, and the organization noted that Morocco would have needed to spend approximately $16 billion on renovations to its current stadiums, new construction and infrastructure upgrades. However, up to 16 venues that exist or are under construction are expected to be used in the United States, Mexico and Canada.

Cromartie said the bid represents an upward trend in popularity for soccer in the United States and a great opportunity for those developing an interest in the sport.

“This United bid is unique because it offers an opportunity for Americans to see some great international soccer,” Cromartie said. “If I want to, I can go up to Canada or visit Mexico to take in a match. I would love to do that. And it also gives people from coast-to-coast in America the chance to see a truly global sports tournament.”

Cromartie says that while soccer has become increasingly popular in the U.S., it is year to reach its full potential.

“Even though we like to say soccer has grown immensely in the United States – and we do have a successful women’s program – the men’s program has not been up to par,” Cromartie said.

“The men’s team needs to have some sustained success and have marketable stars like the women’s team has done. Mia Hamm and Brandi Chastain were soccer celebrities and I believe their popularity has led to some of the success the US Women’s National Team has had in the last few years with stars like Alex Morgan, Megan Rapinoe and Hope Solo. That translated to having a lot of young women getting into soccer and believing they can play in the Olympics or the World Cup one day.”

Cromartie said that strengthening of American soccer has to begin among younger athletes.

“Soccer is a sport that children in other countries grow up wanting to play. It’s like baseball, football or basketball in America,” Cromartie said. “We have the athletes here. And we know that soccer is a game that almost anyone can play, regardless of their income or place in life. All you really need is a ball and a field to play on.

“You have some really good soccer programs around the country, but I would wager that the vast majority of coaches at the youth level are volunteers who don’t have a real soccer expertise, like coaches in some of the European soccer academies and such.”

Canada’s games will be hosted in Edmonton, Montreal and Toronto, while the Mexican potential host cities are Guadalajara, Mexico City and Monterrey.