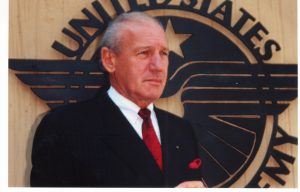 Academy founding president Dr. Thomas P. Rosandich, a long-time leader in sport and sport education around the world, was recently selected as the winner of the Lifetime Achievement Commendation Award from the Alabama Senior Citizens Hall of Fame.

Rosandich will be recognized for the honor at the 2021 Alabama Senior Citizens Hall of Fame Ceremony in Montgomery, Ala. The Alabama Senior Citizens Hall of Fame has honored and recognized Alabamians aged 60 or older for their outstanding contribution to the lives of older members in their local communities since 1983. Those selected as Permanent Members of the Hall of Fame are formally honored and recognized for their selfless advocacy and dedication of service to others at an official ceremony held in Montgomery each year.

A native of Sheboygan Falls, Wisc., Rosandich founded the Academy in 1972 in response to a poor performance by the United States Olympic team in the 1972 Munich Games. Research suggested that American athletes were lacking quality coaching and training, which Rosandich believed could best be remedied through education.

Rosandich relocated the Academy to Alabama in 1976 as the only free-standing and accredited sports university in the United States. Over the past 45 years, the Academy has conferred thousands of sport-specific degrees to its students and has enriched the lives of countless more through its education and outreach programs that have been delivered in some 67 countries around the world. The Academy now offers bachelor’s, master’s and doctoral degree programs as well as a wide array of non-degree sport education programs.

Rosandich was nominated for the award by his long-time friend and colleague Dr. Gaylon McCollough.

“I was genuinely surprised and humbled by this unexpected recognition of my lifetime of service to sports, education and the arts in the State”, said Rosandich. “There is something truly special about receiving such recognition from the larger community where I’ve lived for almost 45 years. I want to thank the Hall of Fame for the Award and Dr. McCollough, a dear and special friend, for nominating me.”

“It was my pleasure to nominate Dr. Rosandich for the State of Alabama Senior Citizens Hall of Fame’s “Lifetime Achievement Commendation Award,” McCollough said. “Dr. Rosandich is more than deserving of this recognition. During his illustrious career as an educator, art enthusiast, and sportsman, he has brought fame and honor the State of Alabama on a scale that few of her citizens can equal.”

The Academy campus, located in Daphne, Ala., which has won architectural awards for its beauty, also houses the American Sport Art Museum and Archives (ASAMA). Founded in 1984 by Rosandich, ASAMA embodies the enduring connection between sports and art. Through tireless effort, Rosandich built the collection into a world-recognized museum housing more than 1,700 pieces in all mediums. It is thought to be the largest museum of the sport genre in the world and is open free-of-charge as a public service to the community.

Rosandich brought to the Academy a storied career in sport. He starred in football and track and field at the University of Wisconsin-La Crosse, where he graduated with a degree in physical education and history in 1954. His alma mater has recognized his contributions by his induction into the UW-La Crosse Athletic Wall of Fame in 1983, naming him the Maurice O. Graff Distinguished Alumnus in 1989, and honoring him annually by presenting the Rosandich Thesis Award, which recognizes the student with the best master’s degree thesis of the year. Rosandich went on to earn a master’s degree in sport administration from the National School of Sport at the University of Indonesia and a Ph.D. in research at Union Graduate School in Ohio.

Following graduation from UW-La Crosse, Rosandich began a 20-year career of service in the United States Marine Corps Reserve, where he coached numerous world record and Olympic track and field athletes. He was the founder and director of the inaugural Marine Corps Schools Relays in Quantico, Va., and was named the All-Marine Track and Field Coach, All-Marine Cross Country Coach and All-Service Coach in 1956 in which capacity he coached the military track and field athletes in the 1956 Melbourne Olympic Games.

Between 1956 and 1976, Rosandich coached in some 50 countries preparing national teams for international games as part of the U.S. State Department’s “U.S. Ambassadors of Sport” program. In this role, Rosandich was charged with using sport to elevate America’s relationship with nations around the world.

Before founding the Academy, he also served as director of athletics at the University of Wisconsin system at Parkside and Milwaukee. His substantial contributions to track and field earned him induction in the Helms Track and Field Hall of Fame. He has also been active in professional organizations such as the National Association of Collegiate Directors of Athletics (NACDA).

Rosandich’s impact in Southwest Alabama has transcended sport and education and has included initiatives such as the creation of “Operation Bounce-back”, the first cardiac rehabilitation program in Mobile. Through the Academy’s outreach programs, the institution is the only enterprise in the area that has brought six foreign heads of State to the Port City.

Rosandich also created the Academy’s Awards of Sport program, which each year serves as “A Tribute to the Artist and the Athlete.” The Academy presents the awards to pay tribute to those who have made significant contributions to sport, in categories as diverse as the artist and the athlete in several different arenas of sport.

Rosandich served as the Academy’s president and chief executive officer for 43 years until 2015, when his son, Dr. T.J. Rosandich, was named president and CEO. He recently retired from the Academy with the title “Founding President.” While Rosandich has stepped down from his role as the Founding President of the Academy, his enduring legacy is that the Academy continues to thrive and serve the profession as an independent, non-profit, accredited, special mission Sports University created to serve the nation and world with programs in instruction, research, and service.