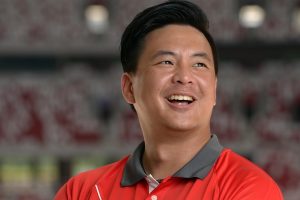 A former Olympic swimmer, Chay, 36, has a history of success as an athlete and an athletic administrator. The former Singapore Sportsman and Sportsboy of the Year represented his home country in five editions of the Southeast Asian (SEA) Games, two Asian Games, two Commonwealth Games and two Olympic Games (2000 and 2004).   As a National Faculty member, he is among a team of highly knowledgeable professionals who teach in the Academy’s post-secondary non-degree sport education programs around the world.

The Academy and Singapore’s ISA have worked together for more than 15 years on sports education programs for the Southeast Asian nation, with Chay serving the past three years as ISA CEO. The Academy and ISA work collaboratively to offer post-secondary non-degree programs including certifications and diplomas to prepare Singapore’s citizens for careers in sport-related fields. The relationship began in 2003 and has built an alumni base of more than 500.

In his latest position, which he will hold while continuing as ISA CEO, Chay will lead the SNOC Athletes’ Commission in representing the interests of athletes in Singapore and promoting the values of Olympism.  Commission members are elected by athletes through Singapore’s National Sports Associations and maintain contact with the International Olympic Committee Athletes’ Commission.

“The Athletes’ Commission is also working on education.  We organize workshops specific to the needs of development/youth, performance/elite, and retired/retiring athletes,” he said.

“These are spread over a range of topics such as social media management, knowing their rights as athletes, sponsorship management, and career/employment skills.  We are also working with various organizations to assist retired/retiring athletes with employment skills and employment opportunities.

“The landscape of sports today is increasingly complex and the challenges happen not only during the athletes’ competitive days, but after as well. Athletes are bombarded with so many demands – performance, commercial and social.

“The athletes have to keep in mind their post-athletic careers as well.  Their sporting careers are short and most athletes have a second career in an unrelated industry.  They need to be able to deal with the physical, emotional and psychological issues in relation to starting over in another career.

“I believe that the Olympic movement is a force for good, and will continue to be a vehicle to inspire future generations of people in sport. There are some issues such as inactivity in youth, vices in sport such as gambling and drugs, and the sustainability of the Olympic Games which need to be sorted.  But I believe the Olympics can overcome these.

“The Olympic program is changing and inclusion of more ‘youthful’ sports such as skateboarding, sport climbing and surfing in Tokyo 2020 would attract a more vibrant crowd.  I would not be surprised if we see eSports in the Olympics in the near future.  Many of these sustainability concerns are outlined and addressed in Agenda 2020.”

Chay was an Academic All-American while earning his bachelor’s degree in communications at Brigham Young University.  He has also taken coursework toward his Master of Sports Science degree at the Academy.  After retiring from competitive swimming, he held leadership positions in the Singapore Swimming Association and the Singapore Hockey Federation.