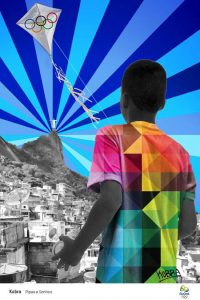 The Rio 2016 poster collection, which includes all 15 official posters from the Games, will be displayed on campus as part of the Academy’s public sports art collection at ASAMA. The collection includes 13 official posters, as well as posters featuring the logos for the Olympic and Paralympic Games.

Representing all aspects of culture and sport in Rio de Janeiro, Brazil, the colorful and imaginative posters were displayed at Deodoro Olympic Park during the Games, then distributed to local schools at their conclusion. The posters feature a wide range of topics – a muscular runner on Copacabana Beach, a child flying a kite, fishing and the sea – to more traditional Olympic representations of the five rings, the Olympic Torch and the laurel wreath of the ancient Olympics. Others are more abstract, featuring bold colors and patterns representing the vibrant life in Rio de Janeiro.

Only a small number of complete sets of the posters were produced, including the sets produced for the Academy.

The works were created by 12 Brazilian artists – Alexandre Mancini, Antonio Dias, Beatriz Milhazes, Claudio Tozzi, Ana Clara Schindler, Gringo Cardia, Gustavo Greco, Gustavo Piqueira, Gut Lacaz, Juarez Machado, Rico Lins, and Kobra – as well as one Colombian artist, Olga Amaral. The posters are part of a rich Olympic tradition which started with the 1912 Olympic Games in Stockholm, Sweden. The posters are selected by the Olympic Organizing Committee for each Olympic Games and are considered historic artifacts for each edition of the Games. 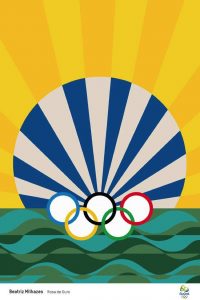 The Academy was able to procure a full set of the highly sought after posters because of its broad network of contacts in the international world of sports. Academy National Faculty member Daniel Bertorelli of Brazil, and his wife, Sansarah, were instrumental in assisting the Academy in securing the official posters from Rio. Bertorelli also gave credit for securing the posters to Rio 2016 Committee members Dr. Carlos Arthur Nuzman, president; Mario Andrada, director of communications; Carla Camurati, director of culture; and Jose Nascimento Brito, council member.

In addition to serving on the Academy’s National Faculty, Bertorelli is an actor, screenwriter and founder of The Hercules Company, an entertainment film production company in Rio de Janeiro, Brazil. Hercules focuses on action, adventure and sports audiovisual content.

To see all of the posters, go to http://www.asama.org/olympic-games-posters/.