US Sports Academy2020-04-13T11:09:50-05:00April 28th, 2017|Comments Off on Academy Trustee and Board of Visitors Member Endow Pre-Medical Institute and Art Biennale at University of Alabama 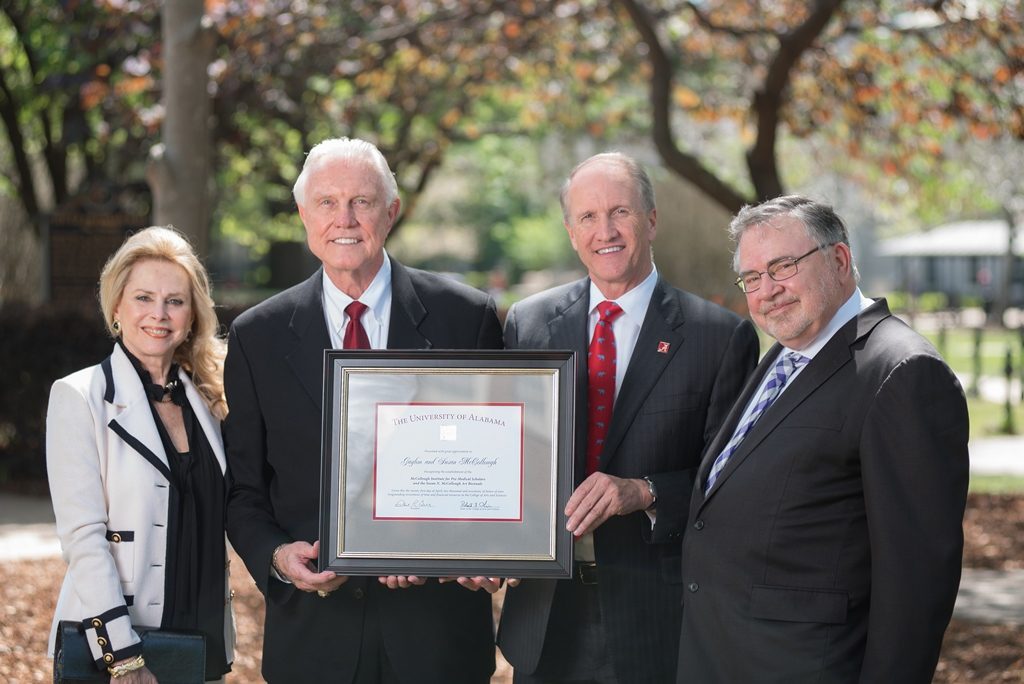 The McCollough Pre-Medical Institute, which is slated to be considered by The University of Alabama Board of Trustees in June 2017 and welcome its first class in the 2019-2020 academic year, seeks to attract the best and brightest pre-med students in the country. The Institute’s curriculum will offer innovative interdisciplinary pre-medical training focused on academic excellence, applied analytics, leadership, community service, scholarly research, communicative skills and ethical professionalism.

“Susan and I have long been committed to encouraging young people to excel—both in our community and state,” McCollough said. “The unique educational experience offered by the McCollough Institute for Pre-Medical Scholars will provide an academic environment that enlightens the mind and buoys the spirit. We envisioned a broad-based course of study, uniquely designed to prepare aspiring physicians for the scholastic and professional challenges that lie ahead, and a venue through which scholars pursuing careers in art could see their works appreciated by individuals from all walks of life.

“We are delighted that the McCollough Institute for Pre-Medical Scholars will become a perpetual educational edifice within the University of Alabama. It should place our alma mater at the top of institutions attended by the most promising of tomorrow’s physicians and surgeons.”

“We are truly grateful for the generosity shown by Gaylon and Susan McCollough,” said UA President Stuart Bell. “They embody The University of Alabama spirit in so many ways, including their commitment to education, leadership and service. This gift is an excellent way to share their success with future generations of pre-medical and art students.”

The McCollough Institute will provide opportunities for concentrated mentorship by limiting the number of freshmen admitted to 40 per academic year, with no more than 160 students in the program at one time.

“We are incredibly grateful for the continued generosity of the McColloughs and of their dedication to our students,” said Dr. Robert Olin, dean of the College of Arts and Sciences. “Susan and Gaylon have been great friends of the College (of Arts and Sciences) with the establishment of the McCollough Medical Pre-Medical Scholars Forum and now these one-of-a-kind initiatives. Their vision of providing a comprehensive, pre-medical education—one that actively incorporates the humanities—is extremely powerful and will benefit our graduates for years to come.”

A portion of the McCollough gift will create the Susan N. McCollough Art Biennale, a contemporary art exhibition showcasing the art of leading professionals alongside emerging and alumni artists. The biennale is expected to attract students to the University who view art as a passion and career.

Prior to what amounts to the largest contribution to UA’s College of Arts and Sciences in nearly two decades, the McColloughs gave a substantial gift to establish the Gaylon and Susan McCollough Pre-Medical Scholars Forum at UA. In February 2107, the McCollough Medical Scholars Forum celebrated its 15th anniversary. The Forum will function inside the Institute and remain a critical part of all pre-medical students’ UA experience.

Dr. E. Gaylon McCollough, former UA All-American athlete and scholar, is a prominent facial plastic surgeon. He is president and CEO of the internationally acclaimed McCollough Plastic Surgery Clinic, and founder of the McCollough Institute for Appearance and Health in Gulf Shores.

He is also recognized by his peers as one of the Best Doctors in America and one of America’s Top Plastic Surgeons. At UA, the 1965 honors graduate was an Academic All-American on Coach Paul “Bear” Bryant’s 1964 National Championship football team, after which he opted to focus on a medical career in lieu of one with the Dallas Cowboys of the National Football League.

Susan Nomberg McCollough is an internationally-acclaimed abstract and impressionistic artist who has produced hundreds of paintings, many of which have won national and international awards. She is a former “Miss University of Alabama” and “Miss Alabama, International” in Long Beach, Calif. (which gave way to the “Miss Universe Pageant”).

About the art biennale component of the McCollough gift, she said, “I look forward to promoting the Art Department at the University of Alabama. The biennale will provide students—right out of college—a platform to exhibit their work in a professional setting, and alongside the works of established alumni/artists of the University of Alabama. For some it might be their first exhibition and open doors beyond imagination.”

McCollough’s works can be seen at her gallery, The Susan N. McCollough Gallery/Studio at the McCollough Institute for Appearance and Health in Gulf Shores or viewed online at susannmccolloughart.media.