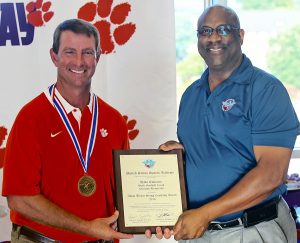 DAPHNE, Ala. – The Clemson University Tigers have been selected for the United States Sports Academy’s 2016 College Football Game of the Year Award after their thrilling last-second victory over the unbeaten and number one Alabama Crimson Tide 35-31 in the College Football Playoff National Championship on 9 January 2017.

The Tigers were led by a stellar performance from heralded junior quarterback Deshaun Watson, whose championship-winning touchdown pass in the final seconds is widely considered to be one of the most exciting finishes in college football history.

The game at Tampa’s Raymond James Stadium was a rematch of last season’s College Football Playoff National Championship in which Alabama defeated Clemson 45-40 to earn the Academy’s 2015 College Football Game of the Year Award. In the remarkable 2016 season, Clemson defeated all of the teams that won the last seven college football national championships – Alabama, Ohio State, Florida State and Auburn.

Trailing 31-28 with just two minutes left in the game, the Tigers embarked on a 68-yard scoring drive capped by a 2-yard touchdown pass from Watson to receiver Hunter Renfrow with one second left on the clock. The score and extra point gave the Tigers a 35-31 lead and secured the school’s first national championship since 1981, its second overall.

Watson – a Heisman Trophy finalist in both 2015 and 2016 – capped a remarkable college career with 420 passing yards and three touchdowns as well as 43 yards and another touchdown on the ground. He was named the game’s offensive Most Valuable Player.

The Tigers trailed 14-0 in the second quarter before Watson carried eight yards for a touchdown with six minutes to play in the first half. Clemson trailed 14-7 at the break. After an Alabama field goal extended the Tide’s lead to 17-7 in the third quarter, the Tigers scored again on a 24-yard scoring strike from Watson to Renfrow. Alabama built a 10-point lead, 24-14, by the end of the third quarter.

The final quarter belonged to the Tigers, who scored 21 points against Alabama’s vaunted defense in the final 14 minutes of play. Watson connected with receiver Mike Williams for a 4-yard score to bring the score to 24-21 Alabama, then Clemson’s Wayne Gallman scored from 1-yard out to give the Tigers a 28-24 lead with 4:38 left in the game.

Alabama quarterback Jalen Hurts scampered 30 yards for a touchdown with 2:07 left in the game, but the Tide’s 31-28 lead was short lived as Watson connected with Renfrow for the game-winning touchdown just two minutes later, with one second remaining on the clock after the score.

A blue ribbon panel of 17 members consisting of former college football coaches and athletic directors and including Academy faculty selects the weekly winner of the Academy’s College Football Game of the Week Award by ballot. The committee is chaired by former U.S. Naval Academy athletic director Jack Lengyel. At the conclusion of the college football season, the panel selects the Academy’s College Football Game of the Year.

The College Football Game of the Year Award is part of the Academy’s Awards of Sport series, a function of the American Sport Art Museum and Archives (ASAMA), which was established as “a tribute to the artist and the athlete.” The program was established in 2005 by the United States Sports Academy to pay tribute to a team whose efforts in a college football game exemplify the principles of high athletic endeavor, complete dedication to victory, and unified team effort.

In honor of each year’s winner, the Academy commissions sports artist Daniel Moore, the 2005 ASAMA Sports Artist of the Year, to create a painting portraying a memorable or pivotal moment to commemorate the College Football Game of the Year and the paintings are on display at ASAMA. The Academy also donates $5,000 to the winning school’s scholarship fund.

Based in Daphne, Ala., the United States Sports Academy is an independent, non-profit, accredited, special mission sports university created to serve the nation and world with programs in instruction, research, and service. The role of the Academy is to prepare men and women for careers in the profession of sports. For more information about the Academy, call (251) 626-3303 or visit www.ussa.edu .

Founded in 1984, ASAMA is dedicated to the preservation of sports art, history, and literature. The ASAMA collection is composed of nearly 2,000 works of sport art across a variety of media, including paintings, sculptures, assemblages, prints and photographs. The museum is open free to the public from 9 a.m. to 4 p.m. weekdays. For more information, go to www.asama.org.