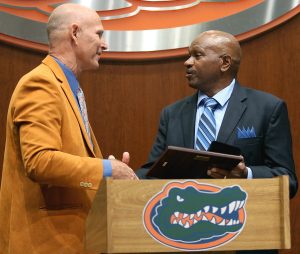 After leading the University of Florida men’s track and field team to its second consecutive and seventh overall national championship, UF head track and field coach Mike Holloway, right, has been named the United States Sports Academy’s 2017 Amos Alonzo Stagg Coaching Award winner. Holloway received the award at the annual UF track and field banquet from Dr. Liston D. Bochette III, a member of the Academy’s Board of Visitors who is a UF Track and Field Hall of Fame athlete.

Holloway has molded the Gators’ track and field team into one of the nation’s elite programs over the last 22 seasons. He is one of seven coaches in NCAA Division 1 history to win seven men’s team national championships and one of three coaches in history to win at least three national titles both indoors and outdoors.

Holloway recently received the award at the annual UF track and field banquet from Dr. Liston D. Bochette III, an Academy Trustee Emeritus who now serves on its Board of Visitors.  Bochette, a UF Track and Field Hall of Fame athlete, competed in the Olympics before serving as Secretary General of the World Olympians Association and founder of the Art of the Olympians, a Fort Myers, Fla.-based museum showcasing artwork by Olympic athletes.  Bochette was the Academy’s American Sport Art Museum and Archives (ASAMA) 1996 Sport Artist of the Year.

The Amos Alonzo Stagg Coaching Award is presented to an individual who has experienced outstanding achievement as a coach for male teams.  This person should exhibit a high standard of propriety, imagination, and innovation as a character-builder in the tradition of great teacher-coaches.

Holloway coached Florida to its second consecutive men’s NCAA Outdoor Championship in June 2017. It was the Gators’ fourth men’s outdoor national title in the last six seasons, as well as the program’s seventh indoor or outdoor national title in school history, all of which have been won under Holloway’s coaching. Florida won the NCAA Outdoor Championships in 2012, 2013, 2016 and 2017, in addition to its three straight victories at the NCAA Indoor Championships from 2010 through 2012. In addition to the Gators’ seven national championships, the team has finished as the NCAA runner-up 12 times during Holloway’s tenure, which is 10 more top two finishes than any other Division 1 program during that span.

The Florida men’s team has finished in the top three in 17 of the last 18 NCAA Championship events, including nine in a row outdoors, which is tied for the third longest streak in Division 1 history.

Holloway’s coaching fingerprints can also be seen on the roster of every United States Olympic track and field team since 1992, which have all featured at least one athlete coached by him. Most recently at the Rio 2016 Olympic Games, Holloway trained to gold medals former Florida athletes Kerron Clement in the 400 meter hurdles and Arman Hall in the 4×400 relay, as well as George Mason alumnus David Verburg in the 4×400 relay.

In addition to the Olympics, Holloway has had at least one athlete compete at every International Association of Athletics (IAAF) World Championships event since 2001. Five of those athletes went on to become world champions. The 2017 World Championships in London featured 15 Florida athletes who combined for five medals.

Holloway is in his 16th season as head coach of the Florida men and 11th as head of the women’s team.  Since Holloway took over as the Florida women’s coach, the team has won six individual national titles in the last four seasons. Florida’s women are one of seven teams to record five top-four finishes during the Holloway era, which began in 2008.

At the conference level, Florida’s women have finished fourth or higher at 15 of the 20 Southeastern Conference (SEC) Championships Holloway as head coach. Those four titles are the third-most by any SEC team since 2008, and the Gators’ three indoor titles are tied for second-most in the SEC during that span.

Holloway, a native of Columbus, Ohio, earned a Bachelor of Arts in History from the University of Florida in 2000.

The Amos Alonzo Stagg Coaching Award is part of the Academy’s Awards of Sport, which each year honor a wide range of accomplishments in sport and serve as “A Tribute to the Artist and the Athlete,” in conjunction with the Academy’s American Sport Art Museum and Archives (ASAMA). The awards recognize these men and women through its Sport Artist of the Year, Honorary Doctorates, Medallion Series, Distinguished Service Awards, Outstanding Athletes, and Alumni of the Year awards.