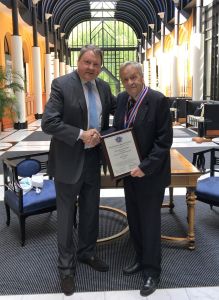 The Eagle Award is presented annually to a world leader in sport to recognize that individual’s contributions in promoting international harmony, peace, and goodwill through the effective use of sport. The recipient of this award must have tempered strength with keen judgment in using authority wisely as a means of bringing nations together through sport for the betterment of mankind.

Kasper also serves as a member both of the International Olympic Committee (IOC) and the World Anti-Doping Agency WADA. He earned his degrees in journalism, philosophy, and psychology from the University of Zurich in 1966. After his university studies, he worked as an editor for the Courier de St-Moritz. Kasper holds an honorary doctorate from the National Sports Academy of Bulgaria.

Before joining FIS, Kasper worked 10 years at the St. Moritz Tourist Office and belonged to the Organizing Committee for several skiing World Cup events and the World Ski Championships in 1974, where he presided over the publicity and public relations efforts. He also oversaw the World Championships of Bobsleigh and the European Championships in Yachting and Riding.

Kasper began his career with FIS in 1975 as director, then became the organization’s secretary general in 1979 before being elected president in 1998.

His career has included working as a SportAccord/Global Association of International Sports Federations (GAISF) member, vice president of the IOC Olympic Channel Services and as a member of the IOC Coordination Commissions for the Winter Olympic Games in Salt Lake City 2002, Torino 2006, Vancouver 2010, Sochi 2014, Pyeongchang 2018 and now Beijing 2022. He served as the Chair of the IOC Coordination Commission for the first edition of the Winter Youth Olympic Games in Innsbruck 2012 and was a member of the second Winter Youth Olympic Games in Lillehammer 2016.

At the IOC Session in Buenos Aires in 2018, Kasper was named an IOC Honorary Member and received the Olympic Order, the highest award of the Olympic Movement which signifies distinguished contributions to the Games.

The Eagle Award is part of the Academy’s Awards of Sport, which each year honor a wide range of accomplishments in sport and serve as “A Tribute to the Artist and the Athlete,” in conjunction with the Academy’s American Sport Art Museum and Archives (ASAMA). The awards recognize these men and women through the Sport Artist of the Year, Honorary Doctorates, Medallion Series, Distinguished Service Awards, Outstanding Athletes, and Alumni of the Year awards.