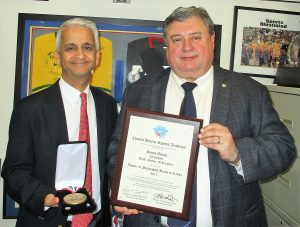 Longtime United States Soccer Federation (USSF) President Sunil Gulati, left, recently received the United States Sports Academy’s 2017 Honorary Doctorate for his outstanding contributions to the sport of soccer at all levels in the United States. Academy President and CEO Dr. T.J. Rosandich made the presentation at Columbia University in New York City, where Gulati holds a prestigious lectureship in the economics department.

Academy President and CEO Dr. T.J. Rosandich made the presentation to Gulati recently at Columbia University in New York City, where the honoree holds a prestigious lectureship in the economics department.

Gulati’s leadership in the development of soccer in the United States spans more than three decades.  He chose not to seek re-election as USSF president earlier this year after completing his third four-year term, a record for the position. First elected in 2006 after serving as USSF executive vice president, he was re-elected in 2010 and 2014.

Each year as part of its Awards of Sport program, the United States Sports Academy presents two honorary doctorates – one national and one international. Recipients are presented with a hood, citation, plaque, medallion and transcript signifying their honorary degree. The Honorary Doctorate is given for outstanding contributions to sport and society.

Gulati has worked since the 1980s to raise soccer to new heights of popularity and has served on the U.S. Soccer Board of Directors since 1995. Gulati has served on the Fédération Internationale de Football Association (FIFA) executive committee and numerous additional FIFA committees.

Throughout his career, Gulati has advocated the growth of soccer in the United States, enhancement of coaching and soccer education, and strengthened relationships with the international soccer community. He led an overhaul of the organization’s governance institutions and policies. He also held numerous positions within the organization, including interim general secretary, executive vice president and managing director of national teams.

A native of Allahabad, India, who grew up in Connecticut, Gulati first became involved with the USSF as a youth coach and administrator while in college.  He went on to serve on the original U.S. World Cup bid committee from 1986 to 1988 that helped bring the event to the United States for the first time.  His service to the USSF was instrumental in the success of FIFA World Cup USA 1994 and the founding of Major League Soccer.  He served as the league’s first Deputy Commissioner from 1995 to 1999.

Former USSF president and Major League Soccer founder Alan Rothenberg called Gulati “the single most important person in the development of soccer in this country.”

In 2012, Gulati was at the forefront in formation of a professional women’s soccer league in the United States, the National Women’s Soccer League (NWSL).

Gulati earned his bachelor’s degree from Bucknell University in Lewisburg, Pa., and master’s degree from Columbia University in New York City, both in economics.  Throughout his involvement in soccer, he has maintained a dual career as a highly regarded senior lecturer in the economics department at Columbia.

U.S. Soccer is the official governing body of soccer in the United States.  With headquarters in Chicago, Ill., the FIFA member governs U.S. amateur and professional soccer, including the men’s, women’s, youth, beach, soccer, futsal and Paralympic national teams. U.S. Soccer sanctions referees and tournaments for most leagues and provides educational and developmental services at all recreational and competitive levels.

The Honorary Doctorate program is part of the United States Sports Academy’s Awards of Sport, which each year serve as “A Tribute to the Artist and the Athlete.” The Academy presents the awards to pay tribute to those who have made significant contributions to sport, in categories as diverse as the artist and the athlete in several different arenas of sport. The awards honor exemplary achievement in coaching, all-around athletic performance, courage, humanitarian activity, fitness, and media, among others. The Academy’s American Sport Art Museum and Archives (ASAMA) annually recognizes these men and women through its Sport Artist of the Year, Honorary Doctorates, Distinguished Service Awards, Medallion Series, Outstanding Athletes, and Alumni of the Year awards.