United States Sports Academy 2003 Sport Artist of the Year Roald Bradstock, a two-time Olympian, recently took part in his fourth Olympic Games in Tokyo. Only this time, the javelin thrower did so as a painter working as an Olympian Artist in Residence as part of the first-ever Olympic Agora, a unique cultural hub in the host city.

Bradstock’s art was part of a series created by current and past Olympians and a Paralympian who are “now renowned artists,” according to organizers.

In addition to Bradstock, the Academy’s 2016 Sport Artist of the Year Gregory Burns also participated in the program. Burns is a world champion Paralympic swimmer who has won five gold and silver medals and broken four world records in three Paralympic Games.

The Olympian Artists in Residence program was first launched at the PyeongChang 2018 Winter Olympics. The program is administered in collaboration with the IOC Sports Department and the World Olympians Association (WOA).

He is a former javelin record holder and also holds dozens of other world records for throwing a variety of bizarre objects, from vinyl records and iPods to cricket balls and golf balls.

In 2000, he won the United States Olympic Committee (USOC) Sports Art Competition in the painting category with a piece entitled Struggle for Perfection. His painting went on to be exhibited at The Olympic Museum in Lausanne, as part of the cultural activities ahead of the Olympic Games Sydney 2000.

In 2017, Bradstock was appointed to the IOC’s Olympic Culture and Heritage Commission. The following year, he was appointed Chair of the newly formed World Olympians Association (WOA) Art Committee, called ‘OLY Arts’. 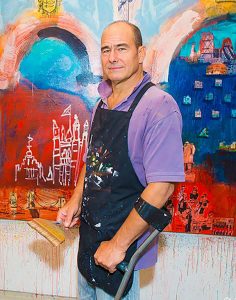 Burns is an internationally recognized abstract impressionist painter, who approaches his canvases with the same passion he had while setting four world records in swimming during three Paralympic Games.

In 1984, Burns studied Chinese brush painting and calligraphy with local masters in Taiwan and China and subsequently, armed with some paintbrushes and broken Mandarin, he backpacked alone for 16 months through China, Nepal, India and Pakistan. Over the course of that journey, he painted for days in and around sacred sites.

With a master’s in fine art and 30 years’ experience of painting across 60 countries, Burns has held 80 exhibitions and received the 2016 Sports Artist of the Year Award. Through his travelling and by casting a wide net, Burns pulls in a diverse collection of colors, cultures and imagery in his work, which portrays the power of the human spirit. His impressive sports resume includes three Paralympic Games: Barcelona 1992, Atlanta 1996 and Sydney 2000.