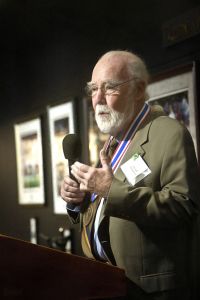 Sheppard, known as one of the great contemporary masters of figurative art in the realist tradition, was honored as the Academy’s 2015 Sport Artist of the Year. His 2001 book, 50 Years of Art, is a major contribution to the appreciation of the outstanding American artist, surveying his achievements of 50 years as a professional artist. Opposing trends in modern art, Sheppard has created a highly individual style both in his paintings and sculpture. Though people are familiar with his portraits, landscapes and still life, his reputation has come mainly from his vibrant renderings of the human figure. This book sums up the last fifty years by presenting twenty large paintings, twelve portraits, twenty drawings and sixteen sculptures.

The DVD Sheppard donated to the Academy’s American Sport Art Museum & Archives (ASAMA) was used as a promotional item for the 50 Years of Art book tour. The DVD will be housed in the ASAMA collection, which already includes Sheppard’s original painting, “The Fighter,” depicting a boxer and his trainer in their corner of the ring during a fight.

Among Sheppard’s many accomplishments, in 1961 he co-founded the Six Realists, a group of young artists who, determined to promote their work, took over a vacant gallery in Baltimore. But after drawing 2,000 people on opening night, the three-week exhibition turned into a three-year venture, earning tremendous acclaim and support for the six enterprising organizers. 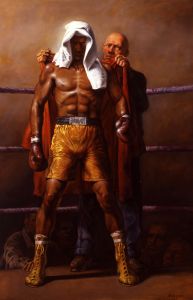 The Fighter by Joseph Sheppard

In the decades that followed, Sheppard built an enviable reputation in the art world. He has been awarded numerous honors, including the Gold Medal of Honor in 1994 from the National Sculpture Society in New York City, and more recently, the XVIII Premio Internazionale Pietrasanta e la Versilia nel Mondo in Italy.

In addition, his work can be found in the collections of such prestigious institutions as the Baltimore Museum of Art, the Carnegie Museum of Art in Pittsburgh, the Butler Institute of American Art in Ohio, the Malcolm Forbes Collection in New York, the University of Maryland University College, the Columbus Museum of Fine Arts in Ohio, the Midwest Museum of American Art in Indiana, the National Art Museum of Sports in Indiana, the National Portrait Gallery in Washington D.C., and the Museo Dei Bozzetti in Pietrasanta in Italy.

Since winning the Sport Artist of the Year award in 2015, Sheppard received the 2015 Tuscany-American Award for his work creating artistic bridges between Tuscany and the United States. In 2019, Sheppard installed a 6×12 ft. mural, “The Schaefer Splash,” at the National Aquarium in Baltimore, Md. The piece depicts a former Baltimore mayor splashing in a seal pond at the aquarium.