Academy to Partner with WorldTeam Sports in Beijing 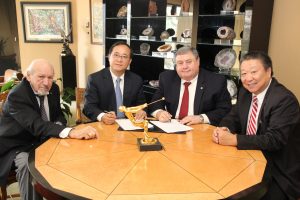 Students at China’s WorldTeam Sports facility will soon have the opportunity to take part in a new international sport education program now that the organization has partnered with the United States Sports Academy.

Led by president Jie “Jack” Guo, a WorldTeam delegation recently visited the Academy campus in Daphne, Ala., to sign an agreement to develop sports education programs in China. The Academy will assist WorldTeam in its efforts to develop a sport education curricula and procedures for educational administration that can be used in China’s public and private educational and sport organizations. The post-secondary, non-degree program will serve Chinese students already working in the sports field. The Academy will teach its program to students in China, who will then visit the Academy campus for further classroom and experiential learning opportunities.

The agreement also means that WorldTeam will keep an office on the Academy campus, while the Academy will also have an office at the facility in Beijing.

“We hammered out a framework to start delivering sport education programs in the People’s Republic of China,” United States Sports Academy President and CEO Dr. T.J. Rosandich said. “This is a very significant step forward for both of us.”

Guo, a leading entrepreneur in China, has worked with the Academy on several educational initiatives including a golf diploma program in 2012. Guo and the Academy also worked together on the development of the Juan Antonio Samaranch Sports City in Fujian, China, in 2011. He is also the recipient of an honorary doctoral degree from the Academy in recognition of his work to develop sports in China.

“We have 11 years of friendship with the Academy,” Guo said. “We have been looking for more opportunities like this one to work together. In the very near future, we will send some of our Chinese students here to learn, and hopefully the Academy will be sending members of the Academy faculty will be visiting us in Beijing. We very much look forward to working together.”

The agreement between the Academy and WorldTeam comes at a critical time for sport in China, as the world’s most populous country will host the 2019 FIBA Basketball World Cup and the 2022 Winter Olympics.

Since its founding nearly a half-century ago, the Academy has leveraged its role and resources as a special mission sports university to make a global impact through quality sport instruction, research and service programs in 65 countries around the world. These contributions have varied in scope from the full-charge conduct of a nation’s entire national sport effort to individual coaching clinics, seminars, and symposia. Clients have included central sports organizations (CSOs, such as ministries of youth and sports), national Olympic committees, ministries of education (for physical education and interscholastic sport programs) and sport associations and federations. The Academy’s international includes some 50 Protocols for Cooperation with sports organizations or institutions of higher learning around the world.