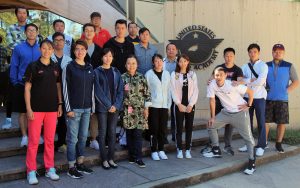 The United States Sports Academy welcomed 20 former elite athletes from China to campus to prepare them for careers in coaching as part of the institution’s International Diploma in Sports Coaching (IDSC) program.

The United States Sports Academy welcomed a group of former Chinese Olympians and elite athletes to campus to prepare them for careers in coaching as part of the institution’s International Diploma in Sports Coaching (IDSC) program.

The students, who are being trained for careers in coaching as their competitive careers in China have come to a close, were selected to study at the Academy as part of an educational and exchange learning program. The Academy is collaborating on the program with the Shanghai Municipal Authority of Sports (SMAS) in China.

Through the IDSC program, nine members of the Academy faculty recently traveled to Shanghai, where they taught 10 courses on various aspects of a career in coaching. Once the Shanghai portion of the program was completed, 20 students were selected to come to the Academy’s campus in Daphne, Ala., for further instruction and experiential learning, including attending sports events and visiting sports facilities in the area.

While the students are on campus, they have the opportunity to experience the Academy’s human performance laboratory and weight room, including practical training in hydrostatic weighing, air displacement plethysmography, muscular strength testing and more. The Academy has one of the most comprehensive human performance laboratories in the region, and students learn various exercise and sport testing methods from qualified professors and specialists.

In addition to experiencing sporting events and visiting sports facilities near the Academy, the students also visited Atlanta, Ga., where they received instruction in coaching principles, sport training techniques, facility operations and more while visiting various athletic facilities there.

The Academy has had a working relationship with the SMAS since 2008. It first partnered with the SMAS for the current training program in 2014.

Since its founding nearly a half-century ago, the Academy has leveraged its role and resources as a special mission sports university to make a global impact through quality sport instruction, research and service programs in 65 countries around the world. These contributions have varied in scope from the full-charge conduct of a nation’s entire national sport effort to individual coaching clinics, seminars, and symposia.  Tens of thousands of students have benefitted from the Academy’s degree programs as well as its post-secondary non-degree certification and diploma programs in sport.